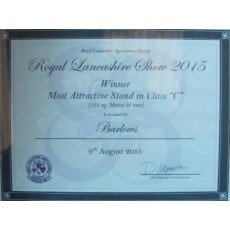 Barlow Trailers are so proud to have won 'The Most Attractive Stand in Class C (151 sq metres and over)' for 2015. Our stand comprised of a selection of Ifor Williams trailers, Equi-Trek horseboxes and Logic ATV Equipment. a big thank you goes out to all those who helped transport the trailers and horseboxes to and from the show and a big thank you goes to Dave who designed the stand and co-ordinated the whole process.

The Royal Lancs agricultural show for 2015 was located on a site off Salesbury Hall Road on the outskirts of Ribchester and was hailed a giant success after thousands of people attended the three-day event. In past years the show has had problems with suitable sites and bad weather but hopefully now it will return to being an annual event.

The show has many attractions such as a military vehicle display, an army village, a farm and countryside village, a quad stunt show, equestrian classes, sheep dog and gun dog demonstrations, dog agility, ferret racing and lots of trade stands